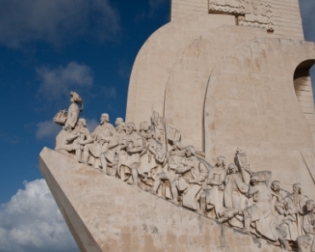 A full-day small group of Lisbon and learn about one of the oldest cities in Europe. We will start the morning by visiting the most historic quarters of Lisbon - The Discoveries Quarter of Belem, from which the Portuguese Caravels sailed off to the epic maritime discoveries. Once at Belem, the Belém Tower, the Discovery Monument, and Jeronimo's Monastery represent the most luxurious and prestigious times of the Portuguese Monarchy, built after Vasco da Gama discovery of India, in the late 15th-century. Following this, we will make a quick stop at the most famous local pastry shop in Portugal “Pasteís de Belém" founded in 1837 where you can try some of this local specialty (not included). The tour will head towards central Lisbon, to admire the major squares such as Rossio Square and Commerce Square, and learn about the history behind the Portuguese Inquisition in the 16th Century. Enjoy some free time for lunch on your own. In the afternoon, we start from Restauradores Square and follow up to visit Lisbon downtown, admiring the narrow streets of Alfama, the Lisbon Cathedral originally built more than 1000 years ago, and views of the majestic Lisbon Castle (St Jorge). We then pass by Chiado and Bairro Alto quarters and some amazing viewpoints like Portas do Sol and Santa Luzia. The tour will end with a visit to Parque das Nações. Located in the modern part of the city near the Tejo River, the park was designed to host the Expo'98 World Fair, an event that coincided with the 500 years of India's discovery by Vasco da Gama. This tour is operated with a minimum of 2 and a maximum of 8 participants. Duration of approximately 8 hours.