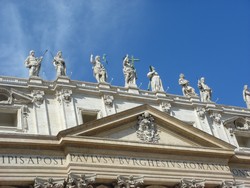 Wednesday morning. Seating is not guaranteed.

In order to arrive at the Vatican City we pass by some of the most famous sights of the city, starting with the Piazza della Repubblica with its Nayad Fountain then the beautiful Piazza Barberini with Bernini's lovely Baroque Tritone Fountain. Continuing along the famous Via Veneto, we reach and then follow the ancient Aurelian Walls passing by the impressive Villa Borghese park until we get to the Piazza del Popolo, the northern entrance into ancient Rome with its Egyptian obelisk dating back to the time of Ramses II. Just before arriving at St. Peter's Square we pass by the massive Castel S. Angelo the ancient tomb of Emperor Hadrian. The Papal Audience will take place either in St. Peter's Square, St. Peter's Basilica or the Audience Hall; according to seasonal conditions and the number of pilgrims involved. This tour lasts approximately 3-4 hours. With your Papal Audience in the Vatican Tour, you'll also receive a complimentary ticket for one run on the Open Bus Double-Decker (2-hour panoramic tour, no stops).