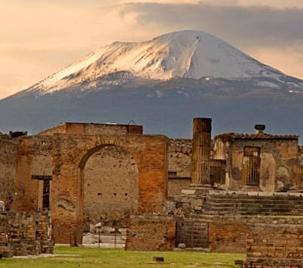 Depart this morning by deluxe motor coach to reach Pompeii, the Roman city buried by the eruption of Vesuvius in 79 A.D.  Sit back and enjoy the drive for approx 1 and a half hours  along the famous Amalfi Drive road, passing all the little picturesque towns to arrive in Pompeii. Here you'll have a guided visit to the archaeological site. With its excavated area, extending for approximately 44 ha, and the preservation state of its buildings, due to the particular burial (under a blanket of 6 meter of ash and rock) caused by the eruption of the Vesuvius in 79 AD, Pompeii can be considered the only archaeological site which gives the real image of Roman city. There will be some free time for lunch on your own before the tour departs by bus to Mount Vesuvius. The coach will drive up to 1000 meters, then, escorted by a specialized guide, you'll walk on the summit. Mt. Vesuvius is the best known volcano on earth & dominates the Bay of Naples with its characteristic cone. Proceeding along the rim of the crater, you can observe the whole extent of the southern part of the volcano and, during days with good visibility, it is possible to see the entire gulf of Naples, from the Sorrento peninsula to Cape Miseno, Procida and Ischia. On the journey back visit one of the most prestigious cameo and coral factories, to see the typical manufacture of cameos.