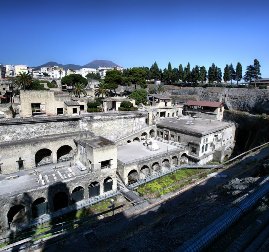 Seriously damaged by the earthquake in 62 AD, Herculaneum was later destroyed by the eruption of Vesuvius in 79 AD. The town has come down to us “frozen” by the eruption which allowed the conservation of wooden structures and small objects, better than has been conserved in Pompeii. The excavations of Herculaneum, together with those of Pompeii and Oplontis, are included on the list of UNESCO World Heritage Sites since 1997. After the tour you will return to Sorrento in the late morning. The approximate duration of your tour will be 4 hours.