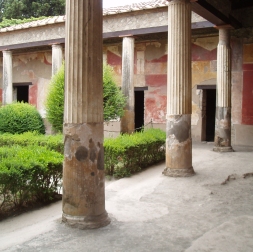 Today depart by deluxe motorcoach to reach Pompeii, the Roman city buried by the eruption of Vesuvius in 79 A.D. Sit back and enjoy the drive for approx 1 and a half hours along the famous Amalfi Drive road, passing all the little picturesque towns to arrive in Pompeii. Upon arrival, our first quick stop will be to one of the most prestigious cameo and coral factories in the region to see the production of typical Italian carvings. Soon after you'll start the guided visit to the archaeological site. With its excavated area, extending for approximately 44 ha, and the preservation state of its buildings, due to the particular burial (under a blanket of 6 meter of ash and rock) caused by the eruption of the Vesuvius in 79 AD, Pompeii can be considered the only archaeological site which gives the real image of Roman city. On today's tour, you’ll see the uncovered remains of life as it was on the day of the eruption - the ancient baths, bakeries, the arena, and even the brothel, and learn about what people were eating, the clothes they were wearing, and much more about the day of the eruption. Following the approximately 3 hours, you will have free time for lunch (on your own) before heading back to the Amalfi Coast.