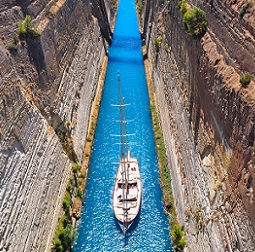 Today you will leave Athens and drive South West until we reach the Corinth Canal which connects the Aegean Sea with the Ionian Sea (short stop).  Drive on and visit the ancient town of Corinth where St. Paul lived and preached for two years. The remains of the City, which include the Agora (marketplace) and Apollo’s Temple (6th century B.C.) clearly show how rich and important Corinth was in Ancient Times. A short stop at the Site of the Ancient Port of Cehries, where St. Paul disembarked, will conclude the visit. Return to Athens in time for lunch. Tour duration approximately 4 hours 45 minutes.